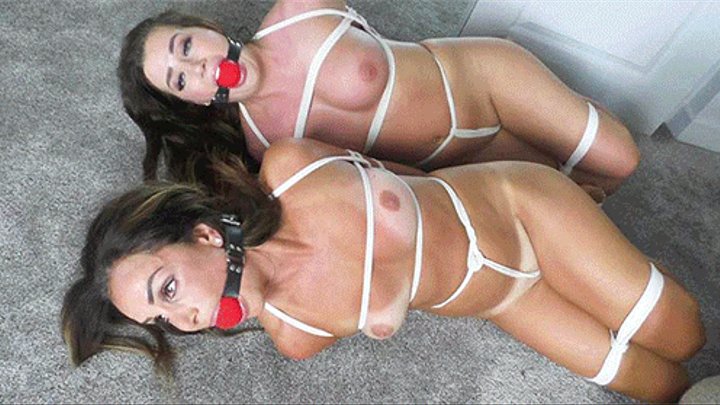 Pandora & Chantelle in: They Came Seeking PayBack - They Wound up Trussed Like Pork Sausages, Twisting & Turning in OutRage 'til DONE! (WMV)

Stripped down to their bare sit-upons, panty gagged (with each OTHER’S) and bound most stringently, the gorgeous girls stare at each other, wide-eyed with shock. This was NOT how it was supposed to play out here today!

Hold onto your hats – the stunning Pandora and Chantelle are back together again, and they are going to take you places. Right after we take them to the deepest of bound and gagged waters, and help them out a little farther still. Make no mistake, we are pushing them beyond their limits with extreme mouth filling gags and limb numbing restraints – all while they are stripped completely naked and barefoot. Watch them TWITCH!

Wronged by a city banker named Edmund Iteration, high flying execs turned impromptu burglars Pandora and Chantelle are out for revenge! They’re already looted his uptown apartment and nicked one of his Jags (he has/ HAD 3) and now are picking the lock to his country manse, where they hear he has many an expensive item secreted. They’ll show him and his dumb (though not too dumb they didn’t swindle this pair) pyramid schemes. They’ll, take everything this fuck has got. Or will they?

Hip to the recent burglaries of his property, Iteration knows where they’ll next hit. He’s been out on the moors all morning grouse hunting and just returns in time to spot Chantelle’s car pulling into his driveway. Laying low in the woods, he spies the girls entering his home – and has an idea…

…Meanwhile, inside the house, clad in lycra dresses and sexy heels, two very beautiful women are slinking around, making their way upstairs (where we grab all the hot, tight ass shots possible) and are about to start looting – that is until they hear the click of an old fashioned persuader indeed. Slowly turning, they are met by Iteration himself, and is he ever packing – and grinning – like he has a plan…

Ushering the gals downstairs under acute duress, he orders them to strip entirely naked and gag one another with their own panties. One in each mouth! Nice! Humiliated but complaint, the ladies are shoved up against the front door and have their wrists tied tightly behind their backs. With that, the man – clearly an ass fetishist – spends some time slapping and squeezing their rumps. Then he bundles them into a parlour where they find themselves further tied up – including painfully about their crotches! The PERVERT!

Groping and squeezing the panty gagged beauties, he produces a roll of strong silver tape, with which he hugely wrap cleave gags the mumbling captives. He then ties their legs up and leaves them squirming and straining on the carpet – but back up a second – not before he has them… do some things for him!

Forcing the gag fuming babes to give him a hot lap dance and marching them upstairs, he thinks better of it and wants to watch them struggle for a while before making himself some lunch. With that, the girls find themselves locked in the parlour, heavily bound and gagged, elbows and legs additionally tied up, gagging on their tightly crammed in underwear.

Pandora and Chantelle grind against one another, all wriggly on the floor, mashing big tits and pressing their sexy asses into one another ‘s, cheek to cheek, before finally deciding to make a mad hop for it! Bouncing along the great hall, destined for the front door, the captives are incensed that they can’t get it open. Their arms will just not give it the effort needed all trussed behind them – elbows cinched to make it even harder. And, of course, they are soon re-captured!

Back in that parlour, the naked bimbos are further felt up before being hogtied extremely securely, mouths stopped with HUGE ballgags. The drool begins flowing almost immediately as they thump around, crotch roped and outraged. Seems Mr iteration is… prolonging matters for them. And we are perfectly happy with this, right? The girls thump around, enraged and salivating, chomping on their massive rubber mouth stops and communicating as best they can – which is to say, quite unintelligibly, but admirably given the energy of it all!

That clever banker (we said BANKER) has disappeared down to the village pub for his usual pint of Old Speckled Chicken. The ladies, trussed up like, well, pork sausages, gagged into the middle of next Thursday, do not know what’s hit them, and are destined to be all wrapped up like his for quite some time to come. So much for payback, eh, Girlies? This is one psycho you should have cut your losses with, eh? Mmmmmrrrrmmmmm!!!!

***All productions (video & images) & associated bondage scenarios depicted are strictly of a role play and story driven nature and feature fully consenting participants and established safe signals (clearly defined within each fantasy scene) between model(s) and crew are in continual use throughout the production.  Thus, these are pure, tongue in cheek adventuristic fantasy scenarios, without exception fully consensual, contextual and supported by model release to this effect***

Feel Free To Send Us Feedback